Even with the one hive of bees dead, I’m so so eager to get started with this stuff again. I’ve now got a basement brimming with pretty brood boxes, supers, bottom boards, inner covers, outer covers, feeders…and there’s nothing I can do with any of it until spring…meaning March or April. Okay…I need to settle down a bit because it’s only January.

I mean, really, it was quite affirming to see those girls so busy in that box yesterday. It warmed my heart. I want a yard and a garden full of them.

It’s confirmed: We have one dead hive. Dead bees everywhere. But there weren’t as many as I would have thought…I just don’t think this colony was ever very robust.

The temperature today is in the high 40s or low 50s, but it’s been raining all the danged day. So Deb and I headed out in the rain to open the hives anyway because later in the week the temperatures will drop back into the 20s, and it’s hazardous to the bees to open their home in that kind of cold. They don’t love getting visited on a rainy day, either, but it seemed the smartest choice. After digging around in that quiet, dead hive, it was such a happy happy sight to lift the lid of the swarm-hive box and see and hear thousand of bees buzzing. I felt great relief.

Then we placed a piece of parchment paper on top of the frames (and on top the bees that were hanging out there…I hope we didn’t kill any of them!); on the parchment paper we poured about 1/2 pound of granulate sugar for them to munch on in the next weeks. We quickly closed things up before we got everyone all riled, and I hauled all the hive parts belonging to the dead back into the basement where I’ll clean it all up before starting again in the spring.

There’s a possibility that temperatures will be above 50 degrees on Sunday, and if that happens, I’ve got to open the hive boxes and get those girls some food. Which means I’ve got to go buy a lot of sugar.

(Deb said this morning that it could be very depressing to open a hive box and find all the bees dead. She said maybe we should do it together. Wasn’t that sweet?)

Don’t think the idea of some dead bees can stop me. Yesterday, I called Walter Kelley and ordered the supplies I need to complete my third hive. (I like the people on the phone at Walter Kelley’s; I always pepper them with a million questions, which they humor me to answer in that unhurried Kentucky drawl. And everyone I’ve ever spoken with over there keeps bees).

I’ve decided to plow ahead by adding another colony. Yes, I made some mistakes this year, but how else am I supposed to learn anything, Reader? I was pretty much on my own figuring this stuff out at first, but now I’ve discovered that two of my friends from church keep bees. (Have I told you what a cool church I belong to? I don’t want you thinking these people I’m talking about are typically churchy. They rock. And they’re smart!)

Anyway, these two friends are a year ahead of me with the bees; they live near one another (and not far from me), and they worked a bit together at this stuff last year. Once I discovered they were into it, I latched on to them like crazy…told them they’d be seeing me a lot in the coming years. Good thing I like them both so much.

Unfortunately, Jim’s bees died. But Christy’s are still going strong. Christy has chosen to go the organic route…no chemicals. I’m with her from here on out.

So, today or tomorrow I’ll be getting a big package from Walter Kelley, and then I’ll head down to the basement with my little hammer and those little nails and spend some otherwise cold and dreary January hours putting all the boxes and the little frames with their sweet-smelling beeswax foundations together.

And soon, if I keep adding colonies to our backyard, it’ll start to look like this! (I love this because you can hear the bees sort of getting under the camera guy’s skin…literally.)

Just so you know, it never got sunny and it never got warm yesterday. But after my freezing and gray bike ride, I leaned my ear against the weak-hive box and tapped anyway. Nothing. So, I leaned my ear against the swarm-hive box and I tapped there, too, just to have some sound to compare it to…because I’m pretty sure there are live and active bees in the swarm colony. Nothing. I rapped louder on the weak colony. Nothing. Harder on the swarm box. Nothing. Nothing and nothing and nothing. No buzzing. And no more knowledge today than yesterday other than to say that I don’t think you can make the bees buzz when they’re freezing cold.

This blog looks bland. Flat. Blah. We need to snazz it up, don’t you think?

But you know, most things look sort of blah in January. The hive boxes out back look downright depressing all dressed in black.

I planted hundreds of daffodils on the bees’ hillside in October and November, and I’m itching to see it burst out in color in a couple of months.

Today, if the sun comes out and hits the hive boxes, I plan to tap on the side of the box containing the weaker colony (if I named each of the colonies, writing about them would be easier). I hope I hear buzzing, but I’m thinking they’re dead. Why? Because there is no activity at their site. The ground outside their hive box is not littered with dead bees that have been removed by the living. Last week I thought the pile of bee corpses outside the swarm-hive colony was a sad sign; now that I’ve learned more, the absence of those corpses at the weaker hive worries me.

My friend, Jim, checked inside his hive and all his bees are dead.

I just mailed my $35.00 check for the March 27th Beekeeping School. I’m stoked about it. And I just learned that the queen begins laying her eggs again in February. Reader, have you noticed yet that it’s almost February?! The days are lighter longer…I noticed that these past few days…and this week we’re supposed to have some mighty nice temperatures in the 40s and 50s. Which means the bees will be taking what are called “cleansing flights.”

During the winter when the weather is sunny and warm, the bees leave the hive to cleanse themselves…which means they fly away and relieve themselves outside. Bees will not—I repeat, not—relieve themselves in the hive. They will hold it for weeks or months at a time. They will only go outside. And then the snow gets little yellow dots all around the hive boxes.

Doesn’t knowing that just make you love them even more? 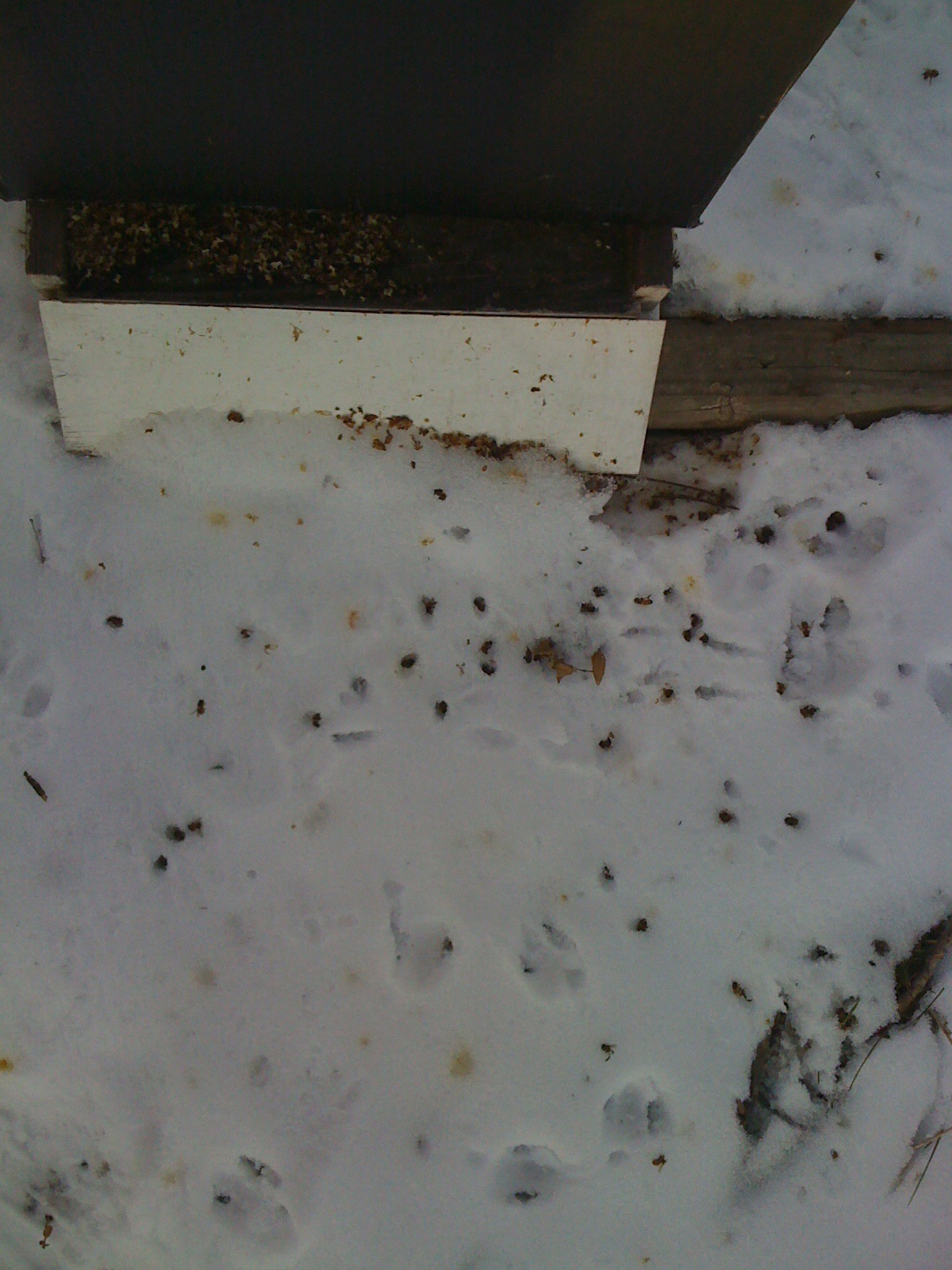 The weather warmed up a bit yesterday, and when I visited the hives, I saw a couple of girls flying about. That made me happy…but all the dead bees spotting the snow was somewhat unsettling.

There’s a lot of trash on the bottom board of the hive box, too…some of it is dead bees and some of it is broken bits of comb. I think the living bees are supposed to remove the dead, because bees are fastidious about their living quarters. I guess they won’t work much until it significantly warms up, though, because they do not want to “break cluster.”

As I understand it, in this cold weather, they all cluster around the queen…it’s warmer this way. They resist breaking cluster…even to find food or to drink sugar water left at their doorstep. So, as the weather warms this week, I hope they’ll start eating and cleaning up.

Yesterday I hiked up to look at the bees in the snow. It was in the late afternoon when the winter light finally hits the hive boxes, and when I stooped to peek in the entrance a little bee flew out. I was so happy to see her! She flew out into the woods, and I can’t for the life of me figure out what she’s looking for out there. There is nothing to eat and everything is covered in snow. Maybe she just had cabin fever and needed some space…I can relate to that…and it was a lovely sunny afternoon.

A few more bees were moving around at the bottom of the hive, but most of the bees littering the bottom were dead. This shouldn’t be surprising…lots of them die off over the winter…but it was sort of sad to see.