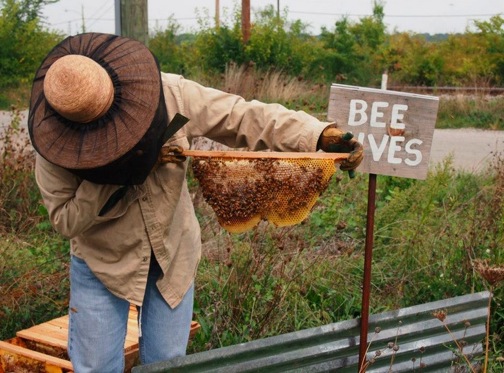 [I attempted to write a paragraph explaining what I think happened to create such chaos in the basement, but then I realized that you probably don’t really care about that, do you, Reader?]

It’s impossible to do good work in the middle of such disarray, and I’ve been hoping to bring some order to it all so I can get back to working happily along, but I became paralyzed by disorganization. I couldn’t even begin to make sense of it all.

I’ve been publicly complaining that I can’t seem to tackle the basement. I thought that perhaps peer pressure might help motivate me. It didn’t. No one really cares about my basement. A couple of weeks ago, I bought some industrial shelving at an estate sale. I thought the shelves might be my answer, but they sat in a pile all disassembled and only made matters worse. I grew in a funk about it.

And then Deb got some free time and some energy, and she directed all her powers to restoring order. First, she cleared the garage and rearranged it. Then she took on the basement. It’s an ancient basement, and the ceiling is low, so she spent days stooped over and banging her head on rafters when she forgot and stood tall. While she did all of that, I took care of the leaves. I think she wanted me out of her way…which was fine with me because I am hopelessly ineffective in that basement right now. I raked every leaf in our yard and from our gardens and from every nook and cranny and mulched every last one of them while the basement transformed.

And now the basement looks better than ever. The floor is clear. There is order. I can breathe and work down there again.

No, it’s not complete. I have been given a list of basement-related tasks to accomplish this week, and from what I’ve seen of Deb’s determination these past few days, I had better check those things off my list lickity split or pay the piper.

Stone-cutters fighting time with marble, you foredefeated
Challengers of oblivion
Eat cynical earnings, knowing rock splits, records fall down,
The square-limbed Roman letters
Scale in the thaws, wear in the rain. The poet as well
Builds his monument mockingly;
For man will be blotted out, the blithe earth die, the brave sun
Die blind and blacken to the heart:
Yet stones have stood for a thousand years, and pained thoughts found
The honey of peace in old poems.

You made crusty bread rolls…

You made crusty bread rolls filled with chunks of brie
And minced garlic and drizzled with olive oil
And baked them until the brie was bubbly
And we ate them thoughtfully, our legs coiled
Together under the table And then salmon with dill
And lemon and whole-wheat cous cous
Baked with garlic and fresh ginger, and a hill
Of green beans and carrots roasted with honey and tofu.
It was beautiful, the candles and linens and silver,
The winter sun setting on our snowy street,
Me with my hand on your leg, you, my lover,
In your jeans and green T-shirt and beautiful feet.
How simple life is. We buy a fish. We are fed.
We sit close to each other, we talk and then we go to bed.

And all that time, in back of the house,
there were pansies growing, some silt blue,
some silt yellow, most of them sable
red or purplish sable, heavy
as velvet curtains, so soft they seemed wet but they were
dry as powder on a luna’s wing,
dust on an alluvial path, in a drought
summer. And they were open like lips,
and pouted like lips, and they had a tiny fur-gold
v, which made bees not be able
to not want. And so, although women, in our
lobes and sepals, our corollas and spurs, seemed
despised spathe, style-arm, standard,
crest, and fall,
still there were those plush entries,
night mouth, pillow mouth,
anyone might want to push
their pinky, or anything, into such velveteen
chambers, such throats, each midnight-velvet
petal saying touch-touch-touch, please-touch, please-touch,
each sex like a spirit-shy, flushed, praying.

In math I was the whiz kid, keeper
of oranges and apples. What you don’t understand,
master, my father said; the faster
I answered, the faster they came.

I could see one bud on the teacher’s geranium,
one clear bee sputtering at the wet pane.
The tulip trees always dragged after heavy rain
so I tucked my head as my boots slapped home.

My father put up his feet after work
and relaxed with a highball and The Life of Lincoln.
After supper we drilled and I climbed the dark

before sleep, before a thin voice hissed
numbers as I spun on a wheel. I had to guess.
Ten, I kept saying, I’m only ten.