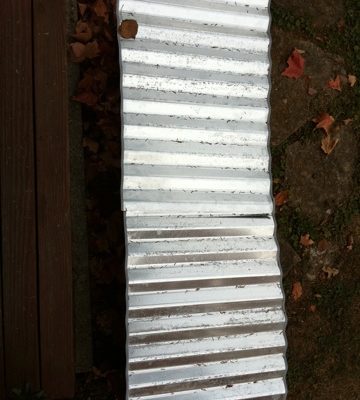 My new top-bar hive is being met with general displeasure. The plywood doesn’t seem to be aesthetically pleasing to too many people. I like it. I’d prefer to use some rough-cut lumber, I guess, but that’s not easy to find, Reader. Others want me to see my next hive made of pine.

I think my aesthetics are just different from most.

I LOVE the corrugated tin roof, but it presented a safety issue. No one would go near its shredded edges. The words “to the bone” were often heard. So, on Friday, my friend Sherry and I headed to Loesch Hardware store (where those guys can figure anything out), and we bought some trim stuff and some silicone calk. We trimmed the aluminum shards from the cut edges; we bent the corners down; we lined the edges with this rubber trim stuff and calked it in silicone. Now it’s safe, and I still like it. (Once the sun comes up, I’ll take a picture of it and post it for you.)

Next time, though, I’m going to a metal fabricator to have my tin cut. 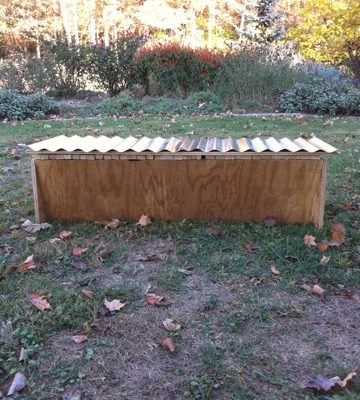 I know you want to see my first Kenya Top-Bar Hive.

I’ve already got plans for a wider, shorter one…one that will accept the frames from my medium-depth Langstroth hive boxes. I want the flexibility of swapping frames from any hives in my yard.

I learned, though, from Michael Bush (I think of Michael Bush as I the Walter Cronkite of beekeeping: the most trusted name in bees) on Beemaster.com., that the waxed-string guides aren’t much of a guide. So, on my next hive, I’ll use something else I have up my sleeve. Shit. I thought I had the perfect solution to a simple guide. I think I’ll leave the waxed string on this hive, though, and see for myself how the bees deal with it.

Also: I love the look and the function of the corrugated tin roof, but cutting it is a bitch. And I’m sure to get little slivers of tin in my hands whenever I inspect the hive. Either slivers or stitches. I gotta find a metal smith to help me cut it better. 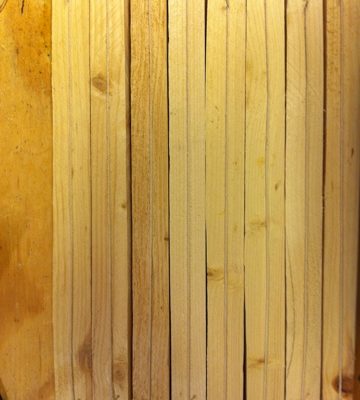 I cut the top bars in keeping with the width at which bees build comb (1 1/4 inches for brood, and 1 1/2 inches for honey. Not that it’s ever that precise or simple). Then, because I’m committed to a simple approach to keeping bees, I used only a piece of string and some melted beeswax as a comb guide (if bees have a guide encouraging them to build their comb beginning right here and going in this direction, they get right to work doing it. Otherwise, you have to straighten out a lot of false starts. Which is fine in nature, but not if we’re going to be removing and handling the frames).

The string is raised just enough for bees to begin their work. The wax not only attaches the string to the bar, but it smells right…as if to say, others have built here before you…now it’s your turn. 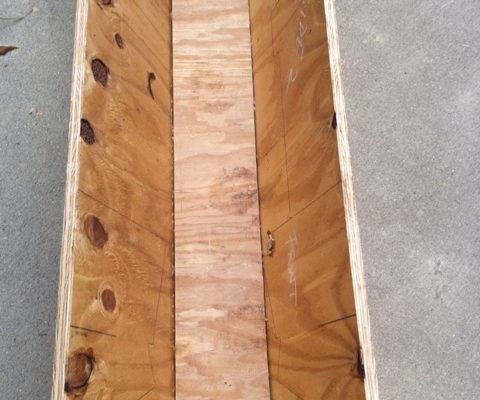 I’ve decided not to show you the top-bar hive I built yet. I’ll tell you about it first and let the anticipation build and build.

Jerod’s hive required a lot of tools: Table saw, hand-held circular saw, jig saw, drill, electric sander. Over the course of the two days it took to build the hive, we burned out the motor on the table saw (hey! it was old!), and we busted a number of drill bits.

I chose to build the kind of top-bar hive that requires no power tools (although I did use a couple). The Kenya Top-Bar Hive was designed for simplicity because it’s designed to be used in developing areas where there’s no electricity. It can be built in a few hours and it’s easy for two people to carry intact…even when it’s full of bees and honeycomb. It’s low profile. I love that idea. To keep it very simple, I chose to use plywood. I’ll try this with other woods as I get better at it.

I made my hive on a day when no one else was around. Just me and my hive out in the backyard.

My hive is a little off-kilter, though. Because we’d burned out the table saw, I had to cut long pieces (46″) using the hand-held circular saw. Let’s just say that my novice hands aren’t perfectly steady at this. So, the hive rocks like a cradle. Big deal.

Below is a picture of the interior (I’d marked the wood as a pattern for the kind of hive Jerod’s built; then I abandoned it).

Tomorrow, I’ll show you the follower boards; I’ll also show you how I made comb guides on the top bars. I’m still searching for a piece of corrugated tin to use as the roof. Isn’t it fun to watch this come together? 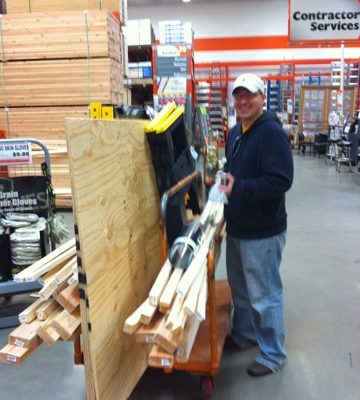 Jerod and I dedicated this past weekend to building our top-bar hives. It took us two hours at Home Depot just to collect our material, but once we got it all home and unpacked, and once we ate a bit of lunch and then pulled out all the tools, Jerod got down to work. And he worked for seven hours on Saturday and about seven more hours on Sunday. His hive is almost complete. He went off the plans there toward the end, and he’s now wrestling with his final decision: how to cover the roof.

Most blogs like this would tell you exactly how to build the hives they show you. Not me. If you want to know any details, you can ask in the comment section here. I’m just going to tell you that Jerod’s hive is pretty but somewhat complicated to build. So complicated, in fact, that I decided to build a different model (which you’ll get to see tomorrow).

I’ll tell you that having a building project in the works outside on a pretty day draws a good crowd. We had a lot of company show up…friends were pulling in right and left on their bicycles. We set up chairs in the driveway. We served refreshments. With that kind of distraction, I’m surprised Jerod could get two boards nailed together.

It’s turned cold these past few days. By “cold,” I mean the low temperatures are in the high 30s or low 40s and the highs are in the 50s. We haven’t yet turned on the heat, but we are sleeping with the electric blanket on low.

And a few of my hives have those augur holes drilled in them. Which means I need to plug those holes so the bees can more easily regulate the temperature in there. This hole-drilling practice was something I saw done by Chris, the guy who started me beekeeping…so I did it too. I thought it was a great idea to give the bees some more air. Maybe because I like to have a lot of fresh air myself. Funny how we project our need on others, isn’t it?

But I’ve since learned that the bees don’t need me to give them air. They do better when they regulate the temperature and moisture in their own homes. It’s as if someone were to come into your home and open or close all the windows or fiddle with your thermostat. That’s just rude…and then I’d have to go around spending unnecessary time and energy readjusting your decision for me.

Anyway…it’s cold, and those augur holes need to be plugged. I want to use corks from wine bottles because they’re made from natural material. But I don’t drink alcohol, so it’s tough coming up with corks. Last year I plugged the holes with pine cones. So, if you’re sitting around drinking bottle after bottle of wine, please forward your corks my way. I need about 6 or 8 of them.

I went out to the beehives at 3:15 PM yesterday in order to film for you the young Amazon bees orienting. They were so active that I wanted you to see them, too, Reader. I got a brief video of them, but then a bee went in my  ear and freaked me out. I slapped and slapped to get it out.

Then I heard more bees. In my hair. By this time I was running through the yard slapping. And getting stung. (Yes, Reader, I am well aware that this slapping and freaking out doesn’t help the situation. I’m not stupid.) I picked up an old sweatshirt laying in the yard and began slapping my head with that. I got stung about 6 times—in my head and ear and neck.

Once the stinging stopped, I realized that all this slapping had flung my glasses off my face. Probably deep into the woods. Deb and I have searched and searched and we can’t find them. We even went out there at night to see if the beam from a flashlight would reflect off them. No.

I am now wearing very very old glasses. I look odd, and I can’t read.

But here’s your damn video. (Once again, I forgot to turn the camera sideways for the wider view. I don’t know why I can’t remember to do that. Sorry.)

There’s a bewitching hour at my hives. It’s the hour when the youngest bees have their little orientation party (they’re 3-4 days old when they do this…and they orient at this hour for several days in a row), and it’s also the hour when the drones fly out to their congregation area. At my hives, these two things occur sometime between 3:15 and 4:30 PM and it last for 20-45 minutes.

Many days you’ll catch me just standing in the yard watching this flurry—I just stand there. Or I go stand right next to the hive to see it better. It’s a completely mesmerizing scene, and I never tire of it. For some reason it reminds me of kittens or puppies playing.

And I usually stand watching just as I’ve come home from work…before I even get into the house. Which is exactly what I think is going on at the hives, too…work has wound down for the day, the kids head out to play in the yard for a while after finishing their chores, the guys go off to hang out together and talk about guy things, and the workers all over the hives are saying, “Ahhh. A few minutes of alone time here before they all come back in and sit on the porch.”

I think I love it because it’s so rhythmic. The entire hive cycle is rhythmic. And the sight of all those young bees orienting is a sure sign that things are good in the colony.