We spent much of the weekend on our farm in Waco, Kentucky. Now that Deb owns the farm outright, we feel we can begin making a few slight changes in the way things work down there. For instance, I think we’re gonna ask all the relatives to come and get whatever they want from the old farmhouse and the shed and the barn; whatever’s left that we don’t want will go up in flames in a bonfire the likes of which Madison County hasn’t seen in a long long time. Keep your eyes on the sky the day following Labor Day.

Why clear all that stuff from the house, the shed, the barn? Sometimes you just need to make some room. Creativity requires room. How can new things come to you, Reader, if there’s no space in which to hold it?

So, Brent (the guy who leases the farm to run some cattle) has recently changed his life. He’s made room in it for new things, and he’s ready to keep bees. We’re thinking of starting about 10 hives down there next spring. The farm is a 2-hour drive from here, and because we get down there only about once a month, it’s important to have someone keeping an eye on the bees…and Brent seems perfectly delighted at that prospect. He’s decided on a spot against a fence for the hives. He’s planning to seed a field in clover. For whatever reason, a reason I have no need to understand, Brent needs bees. Just as I did.

You know, Reader, I find it quite fascinating that some people—people such as Brent and me (and perhaps even you)—become ready. I don’t know how to describe it, but I can spot it right away. A light appears in the eye. A space is held open in the body for it. Other people make polite conversation, but those who are ready cannot be satisfied with small talk. Might as well go ahead and buy those people a smoker of their own.

You should smell my car. Well, first you should know that I drive a 12-year old Nissan Pathfinder (it has over 160K miles on it, but I’m not giving it up…I figure I can get 250K miles out of it. I don’t quit on things).

My car smells like smoke and beeswax, and it’s a joy to sit in when I’ve been visiting beeyards. Why? Because the smoker’s still smoldering in the car, and I often have some freshly used frames of beeswax in there with me.

So, let’s talk about the smoker—which is the single most important tool when it comes to keeping bees. Even those beekeepers who don’t routinely wear veils use smoke. I’ve never met a beekeeper who doesn’t have a smoker lit and ready to use when visiting the bees, and I probably wouldn’t work with one who didn’t.

And wouldn’t you know it? The single most important beekeeping tool is also one of the most pleasant and sensory to use…but it’s also (initially) a pain in the neck. It takes some time and some attention (and some experience) to get a smoker properly puffing away…and I admit, it’s tough to carve out the necessary time and attention when you’re in a rush to open a hive. Frankly, I’ve come to think of lighting the smoker and nurturing the smoke from it as a sensory way to transition from the rush rush rush of daily life to the calmer behaviors appreciated by the bees.

You want to know why beekeepers use smokers, don’t you, Reader? Well, the short of it is this: Beekeepers announce their arrival at the hive by puffing a bit of smoke into the hive entrance and under the lid. This announcement leads the bees to think there may be fire in the area, so they begin the process of engorging with honey in the event they must leave to find a new place to live. And when bees eat honey, they become calm. A bee filled with honey does not want to sting. However, in the event a bee didn’t get the message and does sting, the smoke serves to mask the alarm pheromone (emitted at the time of the sting) that signals other bees of danger; so, it reduces the chances of more stings.

We keep the smoker lit and puffing away in the event the bees become agitated. A little cloud of cool smoke settles everyone down…including the beekeeper who, when she operates those billows, feels as if she may have some sort of control over the world. Which she does not have at all. But it smells nice and looks cool.

All of this to say that I’m now using a new smoker—a Rauchboy. From Germany. It looks awesome and smolders like crazy. It’s a little more expensive than the run-of-the-mill smokers, but I want mine to stand out in a crowd. I’ve kept it lit in the backyard just for the heck of it…just so it can hurry up and get its patina on. 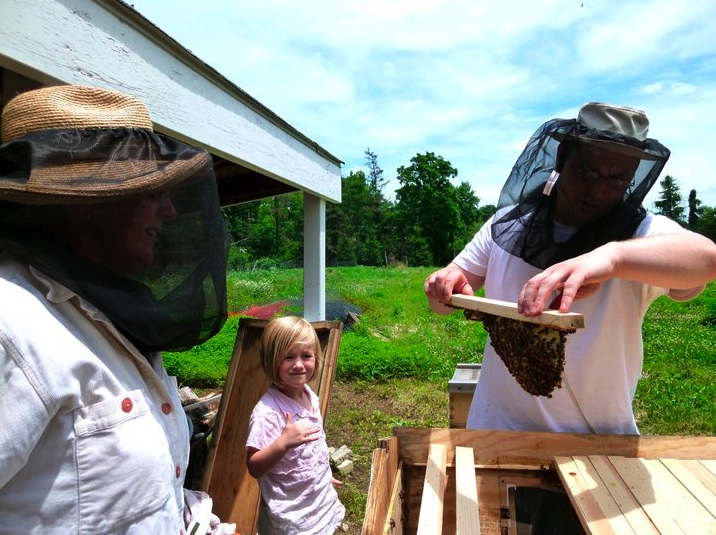 I’m on a quest. I’m on a quest to find a hat and a veil that I like and that suits my style. I’m not sure why I’m not satisfied with the typical beekeeping hat and veil, but I’m not.

Right now I’m wearing a Tilly hat, but it’s not straw. The Tilly hat is fine, but I don’t look the way I want to look in it, you know?

Oh, and did I tell you? I ordered a wonderful, wide-brimmed straw hat online from Gempler’s, but it was too big (to compound the problem of my search, I have a very tiny head). When I tried to return it, Gempler’s said they would simply refund the money (because it cost too much for them to ship back and forth! I love this wonderful policy), and that I should give the hat to someone who could use it. Is that the greatest thing ever?!

Next thing I know, Deb is wearing my new hat to mow the lawn. And she looks like a million bucks in it. Just the way I wanted to look. So now Deb has a wonderful, new, wide-brimmed straw hat. And, wouldn’t you know it, they don’t make it in a small. Which is one huge obstacle to my hat shopping. 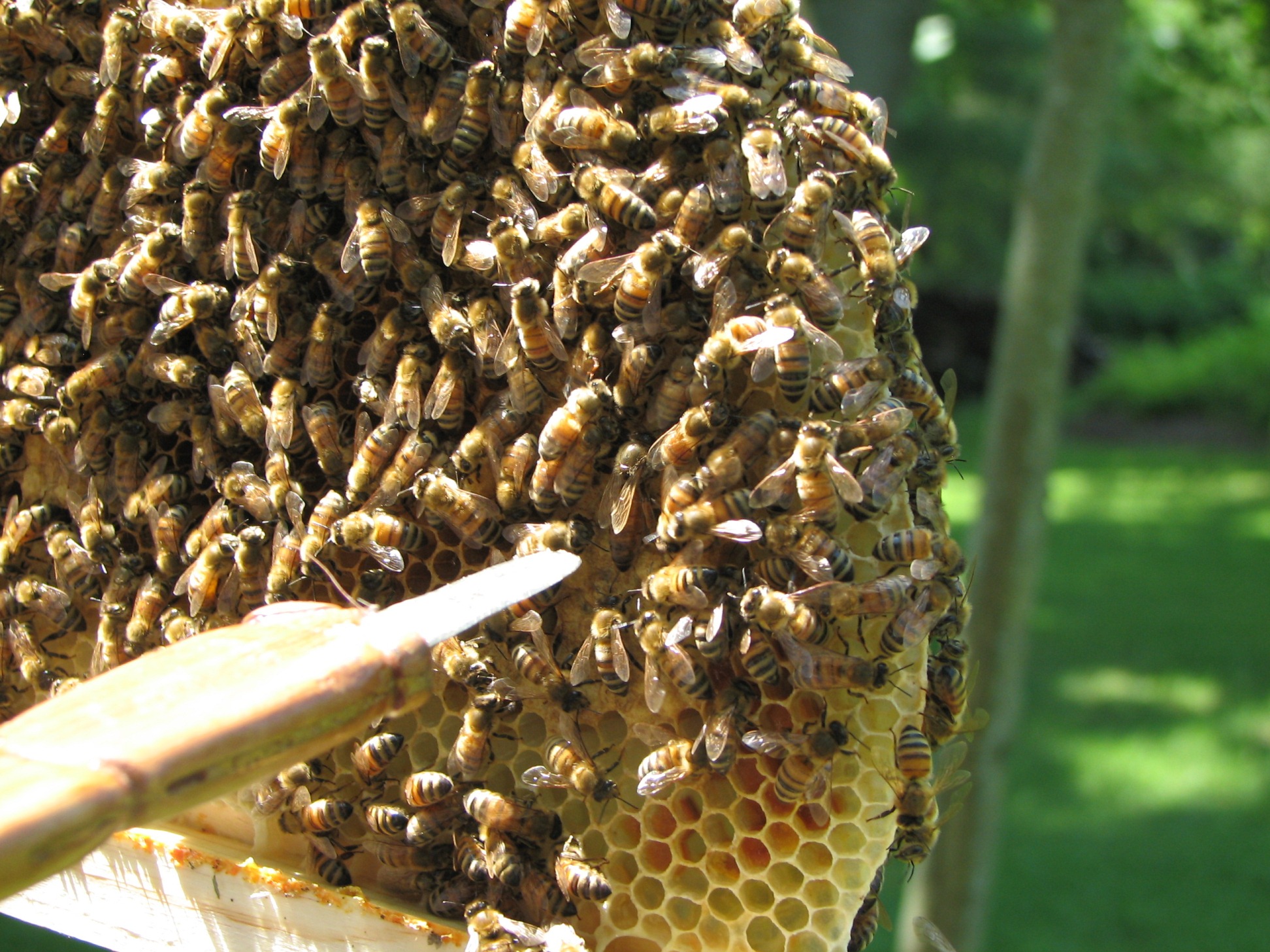 If you’ve come to TwoHoneys via Elissa Yancey and Summer Genetti‘s wonderful Soapbox Cincinnati feature about Cincinnati’s urban beekeeping, then you may be surprised to find only this blog alive here.

The TwoHoneys Bee Company site is undergoing some changes, and you can’t see it yet (but I invite you to “like” the TwoHoneys Facebook page where you can keep up with our bee stewards until the website is back in action).

Until my beekeeping webmaster returns from his darned honeymoon, most of this site remains unavailable (we gave him a Warre hive as a wedding gift…I can’t wait to see it alive with bees. It came unassembled, and we plan to make a pattern from the various parts so we can construct the next one ourselves…but I digress). When he returns from his cruise and Russia’s White Nights and gets his head back into the game of everyday life, we’ll be back in business, and this blog will become only a small part of the larger scene.

Until then, let’s see if you can find the queen (spotting the queen improves with practice…it will help if you can click on this image to enlarge it): 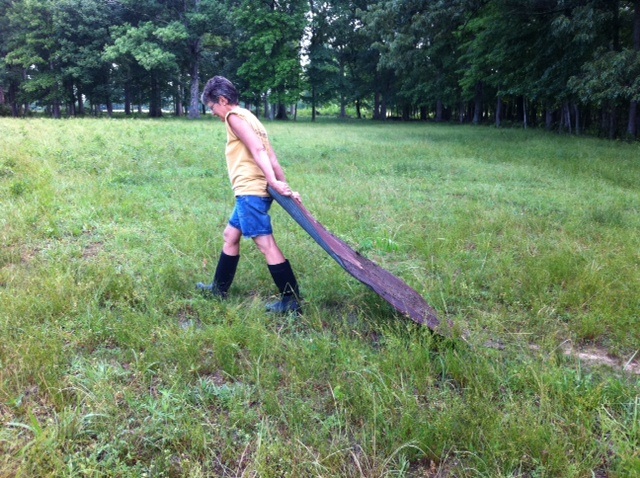 My aesthetics are evolving. You know, when I first told Deb I wanted to keep bees, she wasn’t thrilled. Why? She didn’t want to see a line of towering white boxes on the hill in our yard. And I get that. I don’t like the white boxes either, so I painted my boxes a few different colors. I’ve settled on a couple of colors that I like, and now I paint all my boxes some variation of those. (Every now and then, I throw in a shade of blue that I’m not crazy about because Deb likes it. Gotta do it.)

However, I’ve started to like the way the Langstroth hives look unpainted. I like the way they weather…especially if the boxes are jointed together…because the joints weather a different shade than the flat parts.

All of this to say that since I first learned of top-bar hives (TBH), I’ve been drawn to the ugly ones. The ugliest ones. The very ugliest ones. None of those pretty hives for me.

Right now, I’m still buying some lumber, and I’m still using power tools. But TBHs are awesome because they can be built without power tools, and I’m working my way there. I think I’ll like the looks of the hives once I go completely powertool-less (I had to make up the punctuation of that last word…no dictionary recognizes what I’m trying to accomplish with it).

This most recent hive was constructed of cedar fencing. The roof is a piece of barn roofing that flew off our Kentucky barn. When we get back to the farm, I’m gonna scavenge the barn (which is falling down) for old siding and use it to build the next TBH iteration.

They may kick me out of my nice neighborhood for getting so ugly.

Last Night As I Was Sleeping

Last night as I was sleeping,
I dreamt—marvelous error!—
that a spring was breaking
out in my heart.
I said: Along which secret aqueduct,
Oh water, are you coming to me,
water of a new life
that I have never drunk?

Last night as I was sleeping,
I dreamt—marvelous error!—
that I had a beehive
here inside my heart.
And the golden bees
were making white combs
and sweet honey
from my old failures.

Last night as I was sleeping,
I dreamt—marvelous error!—
that a fiery sun was giving
light inside my heart.
It was fiery because I felt
warmth as from a hearth,
and sun because it gave light
and brought tears to my eyes.

Last night as I slept,
I dreamt—marvelous error!—
that it was God I had
here inside my heart.