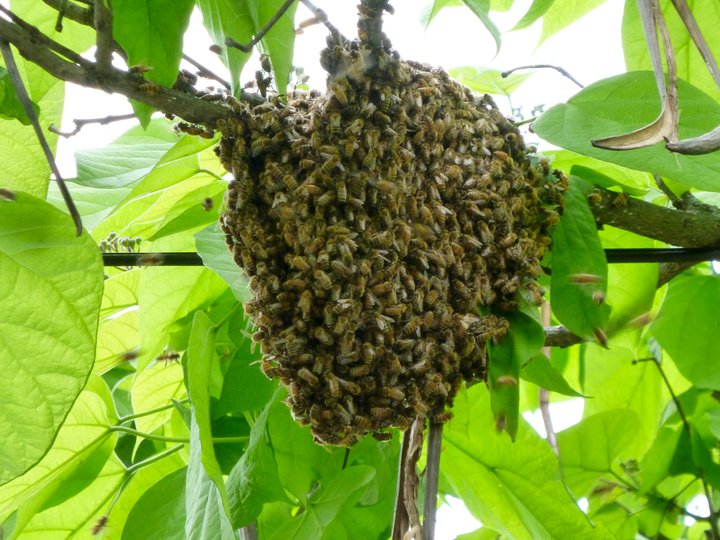 TwoHoneys Bee Co. leaps at the opportunity to collect your swarm of honeybees…nothing delights us more! If you spot a swarm of bees hanging from a branch or from a fence post or from some other unexpected place, you’ve got to act quickly: contact TwoHoneys Bee Co., and we’ll get right on it. And if for some strange reason we can’t do it, we know people who can. We’ll handle it.

Definition of “a swarm”
A swarm of honeybees is an organized, collective unit of bees in a (thrilling!) state of migration.

Why Bees Swarm
Swarming is the sign of a vigorous, productive, propagating colony. Honeybees swarm for one of two reasons:

What Happens When Bees Swarm
A “colony” of honeybees is composed of three castes of bees—workers, drones, and a queen—all living together in a single hive where they build honeycomb, raise brood, and store food.

When a colony of honeybees prepares to swarm, it sets about raising a new queen. Once the colony determines that it has successfully prepared for a new queen, the hive divides (I don’t know how the colony knows which bees will go which way, but they make arrangements). Then, usually on a sunny day sometime between 10AM and 2PM, approximately half the bees engorge themselves with honey (enough to sustain themselves until they settle into a new home) and, in the company of the wonderful old queen, they fly from their hive never to return.

At this point, when half the bees leave the old colony and before they enter what will become their new one, we consider them “a swarm.”

The swarm exits the hive in what first appears a wild and chaotic explosion. It’s awesome to see and hear and even more magnificent to stand in its midst. Very quickly, however, the swarm organizes into a large, humming, morphing mass of bees surrounding the queen.

The swarm seldom flies far from the originating colony (because the queen can’t fly far), before it organizes—usually on a tree limb or on some other stationary structure 10-20 feet above ground. There it hangs and moves and breathes and waits…typically from 24 to 48 hours—until the scout bees locate a suitable future home. Once the bees in the swarm agree on a suitable next hive, they fly immediately and directly to it and set about building honeycomb, raising brood, storing pollen and honey. And there, in the new hive, this wonderful cycle begins to repeat itself.

Why Beekeepers Value Swarms
Swarms arise from vigorous, healthy hives. Hives will not split and “throw swarms” without confidence in the resources necessary to sustain both the originating colony and a new one. Vigorous, productive hives and genetics are always of value to beekeepers.

What’s more, swarms are primed for immediate action. Within minutes of inhabiliting its new hive, the mass of honey-engorged workers sets about converting honey to beeswax and constructing honeycomb in which the already-proven, mature, mated queen begins laying her eggs. It’s a phenomenal force of nature, and who wouldn’t want that?!

Even more wonderful: If the swarm that hangs from a tree branch or from a lamppost or from a mailbox is at all reachable by the beekeeper, then it is usually a simple procedure to collect and hive it. Because the bees are so engorged with honey, and because a swarm has no food stores and no brood to defend, the swarm is at its all-time most docile…all the power and productivity of the swarm comes packaged in a docile, fascinating mass…which translates into a wonderful experience for the beekeeper and for any observers. Trust me. It’s swell.

In a Nutshell…
A swarm is an organized unit of bees in a state of migration between a past and a future hive. When bees live in a hive, we consider them a “colony.” As the bees migrate from one colony to another, we consider them “a swarm.” In other words, the state of the bees shifts from “colony” to “swarm” to “colony.” Got it?

So if you’re lucky enough to witness a swarm —a morphing mass of bees in migration—consider yourself among the privileged. Then quickly contact TwoHoneys Bee Co. (513-675-9897 or liz@two-honeys.com) because we absolutlely love to collect swarms of honeybees.

If you live in the Greater Cincinnati area and you discover a SWARM of honeybees, or if you find HONEYBEES sharing your home with you, I will happily collect and re-hive them so they can live in my care or in the care of a local bee steward. And if I can't collect your bees, I know people who can. Email me: Liz@two-honeys.com.