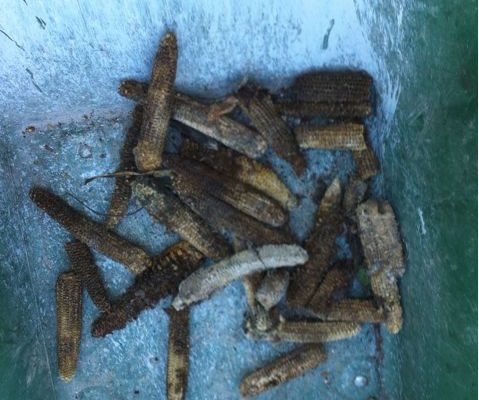 I spent some time yesterday setting up the site for the new bee colonies. First, Deb helped me move the remnant of an old wood pile. Then, I had to move the compost heap.

As I was shoveling the compost to its new spot, I uncovered something that promises to work great in the smoker I use to calm the bees. Yep, you guessed it.

In her very sweet way, Deb has “suggested” that we put no more bee colonies on our little hill.

(You know that only 2 or 3 of these colonies will survive the winter. But then, I plan to capture some swarms in the spring, so the number should continue to grow. If you’re reading this post and you live in Cincinnati and you want to keep some bees at your place, let me know.)

And, although all six colonies are tucked into the woods’ edge, they’re still visible from our house. They’re also visible to any neighbors who drive by, and we don’t want to overtax our neighbors’ generosity in regard to bees. There’s always a breaking point, yes?…I mean, at some point some neighbor will say, “Hey. That may be a one or two too many bee colonies on the block.”

Although I think those colonies are spectacular to look at, and I never get tired of watching the bees dart through the woods and our garden, Deb admits she’d probably prefer gazing into the naked woods without having to see the hives.

So, last night after dinner, we went on a little yard walk to see where we can place the swarm hive and any future hives we might add. We decided on a spot behind the garage near the wood pile. The problem with our new spot, however, is that we’ll have to mow around the hives there. I’m not thrilled about that, but if that’s what it takes to keep a few more colonies around here, we’ll do it.

Maybe we’ll let some ground cover take the place of the grass back there. Or, better yet, maybe we can plant some wildflowers there. That would be awesome.