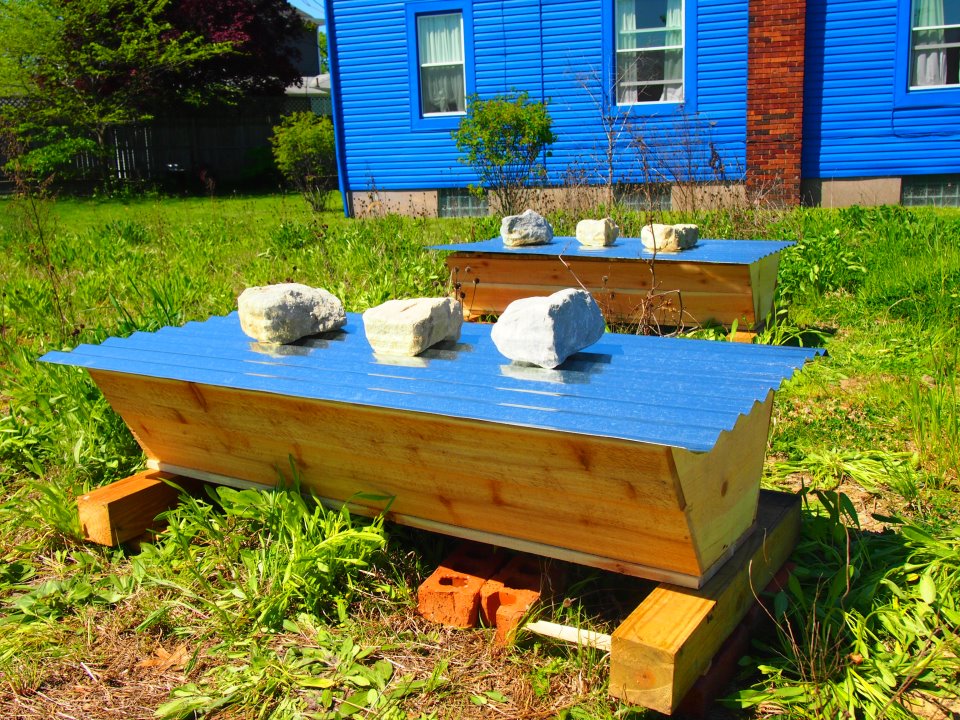 Did you know, Reader, that we’ve placed a couple of top-bar hives at Brazee Street Studios? Yes. We placed them in a nice spot, took this picture, and then when our backs were turned, the wind toppled them. Thank goodness there were no bees in them yet (the bees arrive in a couple of days).

So, I went out there yesterday and strapped the hives to the ground using stakes and a network of bright red bungee cords. It’s a temporary solution that works just fine, though the sight of bungee cords is never a sight I’m crazy about…and, let me tell you, artists are way pickier about aesthetics than I. I mean, I like a thing to look good, but I think my idea of looking good may not be up to snuff for some.

For instance, as we contemplated hive location, Sandy Gross, the wonderful owner and energy of Brazee Street Studios, had an idea of how the hives would sit. She simply began moving the hives to fit her mind’s eye. I didn’t see it, but she sees it, you know. When you see that someone sees it, you go with it. And there you go.

As a final touch, Sandy placed a heavy white stone on a hive to keep the lid from blowing off. But when she headed off to find even more heavy stones, I called out that I thought one stone would do the trick. To which she matter-of-factly replied that she prefers things in threes. :)

So, you see, Reader, it’s not only a matter of what will do the trick…it’s also a matter of how a thing feels to the eye. If it’s not right to the eye, it’s simply not right. So now there are three large white rocks atop each hive.

I totally get all of that, and I’m happy that these hives are assuming the character of Brazee Street Studios. And, let me tell you, it doesn’t take a Vincent Van Gogh to know that red bungee cords are not a good fit out there.

(I’ll have an update on the Brazee beehive solution in tomorrow’s post.)