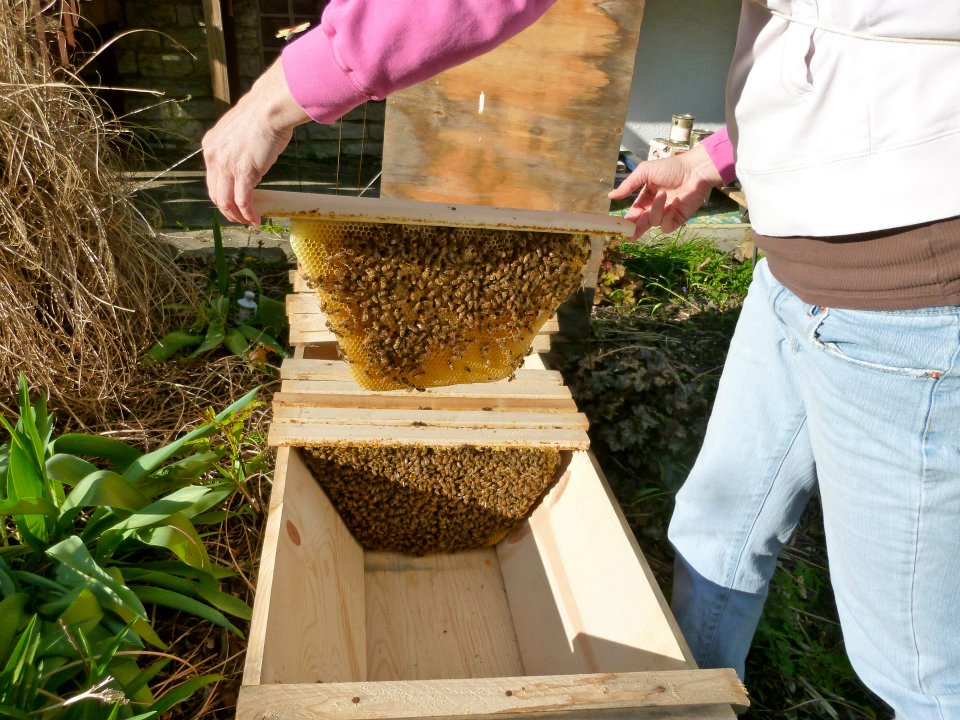 The newly forming hive pictured above belongs to my friend Nicola. Her powerhouse hive is going gangbusters this year. When the original colony (a swarm we captured together in 2011) ran out of room in its current hive box, it began creating drones by the boatloads. When it set about creating another queen, Nicola set about splitting the hive in two.

I keep thinking that I’d like to switch all my hives to top-bar hives. If all the hives I manage were in my yard, or if all the hives were placed in locations closer to where I live, I’d probably drift away from the Langs. But many of my hives live far away. Which means I can’t get to them each week in order to inspect them. And that’s the key to managing TBHs: regular and diligent management.

To my mind, the only drawback to a TBH is that its space is limited. If the beekeeper neglects a TBH, the bees will soon outgrow their limited space, and they’ll likely swarm. And there goes hopes for honey. And I’m not ashamed to say that honey is a big deal to me. I want it. I don’t need tons of it, but I definitely want honey.

On the upside:  Limiting space also means limiting the number of  bees living in the hive…which makes for a more pleasant visit when it comes time to inspect.

AND…I have not yet lost a single colony from my four TBHs. Which is rather incredible.

Probably 30% of my colonies living in Langstroth hives die.

Some colonies that I’ve cut out from structures and placed in Langs abscond. When I’ve captured those colonies and put them back in their Lang hive, they abscond again. When I capture them again and place them in TBHs, they stay. And live with enthusiasm. I simply believe that the TBH makes for happier bees and happier beekeepers.

The minute I learned about top-bar hives, something drew me to them. And something keeps drawing me. I’ve learned to pay attention to such attractions, so this year I plan to double the number of  my TBHs. I’m building them like crazy. Sawdust is everywhere. So, if you ask for my suggestion, Reader, I suggest you begin keeping bees in top-bar hives.