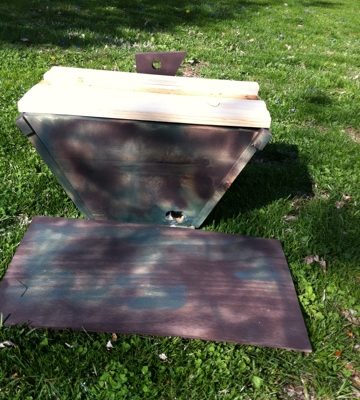 I think it’s swarm season, and as of yesterday I still hadn’t hung my home-built swarm boxes in their trees.

So, yesterday I hung one box in a tree in my beeyard. I’m not sure it’s high enough, and I may have put a bit too much lemongrass oil in the little container, but it’s hung. And even though I painted it camouflage, Deb spotted it immediately when she got out of her car. “What’s hanging in that tree?” she said. Bummer.

Come on, my little swarmies. 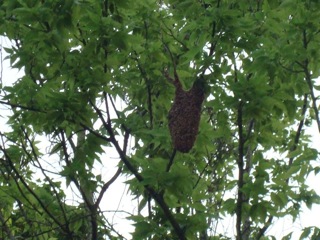 We’d just settled down in the Adirondack chairs when I looked up into the tree. And there was something just not right about something up there…it looked odd. And then I saw it—the SWARM.

My Amazons had swarmed and the swarm was drooping from the lowest branch of a tall tall tree. Too high to reach by any ladder other than one belonging to the the fire department.

Oh my gosh, did I jump to action. I ran into the basement and yanked all the leftover equipment stored down there and I ran it all out and set it up under the swarm…then I jumped in the car and drove like a crazy person to the Natural Food Store to buy lemongrass oil because it’s said to be a swarm lure. We smeared lemongrass oil and honey all over the super and frames set beneath the swarm, and we hoped the girls would decide it looked like a great home.

To make a long story short…we set the bottle of lemongrass oil on the lure box; we took the stopper out of it; we put the stopper into it again; we moved the lemongrass oil inside the lure box; we moved it out again; we set the lure box up on a ladder; we tried to throw a long rope over the branch the swarm was attached to; we couldn’t reach it with the rope; we tied a wrench to the end of the rope as a weight to help us reach the branch and tried it several more times again; we succeeded only in throwing the wrench and rope into the garden; we spread a sheet beneath the swarm in case the swarm dropped from the tree—we did everything we knew to do, and then we undid it. We have no idea what we’re doing. How on earth can you seduce a swarm of bees?

I went out there in the night with a flashlight to check on them.

They were still there this morning.

I turned my back on them for 10 minutes and they disappeared. They now live in some unknown hollow tree trunk in the woods behind our house. Deb’s been out there searching for them.

I was so disappointed.

I guess the good news is that now we’ll have a new queen in the Amazon hive because the older queen should have left with half the bees. God speed, bees.

It helped that I later discovered two frames of capped honey ready for harvest…and we collected about 2 pounds of gorgeous, almost-clear honey from our Amazon girls.