One day the bees start wandering off, no one knows why.
First one doesn’t come back, and then another and another,
until those who are supposed to stay and guard the hive, those
who are making the royal jelly and feeding it to the queen,
those who form different parts of the great brain, must
put down what it is they are doing and go off in search—
having no choice, not if the hive is going to survive,
and where do they go, each one vanishing, never to be seen
again, off wandering in the wilderness, having forgotten
how, forgotten what it was they were after, what it was
that gave meaning, having known it at one time, now
a veil drawn. Is it that each one is a cell, a brain cell,
and now they’re failing one by one, plaque to Alzheimer’s,
or the way the cells in the esophagus will begin to mimic
the stomach if the acid is too intense, if you’re sleeping
and the valve won’t close, a lifetime of eating and drinking
the wrong things, those cells compensating, trying
their best, but opening the door to those other cells,
the wild ones, the ones that call those bees, out there,
somewhere, lost, having nowhere to return at night,
their search for nectar fruitful, their small saddlebags full,
but no one to go home to, no home, no memory of home,
it’s as if they’d stumbled into some alternate world,
one looking like ours but just a glass width different,
just a fraction of sunlight different, the patient waking up,
finding herself wandering, someone leading her back
to bed, but there is no bed. Confusion of the hive,
they call it, and the hive dies, each bee goes down,
each light goes out, one by one, blinking out all over town,
seen from a great height as the night ages, darkens,
as you’re parked in your car with your own true love,
until it’s just you two and the stars, until it’s just you. 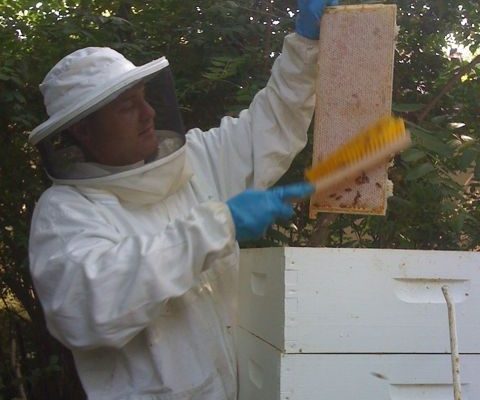 Jim’s bees made him some beautiful honey this year, and yesterday he made a little party out of harvesting it.

I helped pull honey from the supers…it was only around 96 degrees out there! Actually, the fact that the honey was so danged warm made it easier to extract (and, oh my gosh…you should taste warm honey straight from the hive. To. Die. For).

Then we picked up Christy and all her harvesting equipment. Christy lives and keeps her hive about two blocks away from Jim…she inherited and then refurbished an extractor made in the 1800s. In the 1800s, lids for extractors must have been considered sissified, so we ended up covered in a little glorious mist of honey.

Jim set up his honey shop in his basement laundry room. First, Jim decapped the honey by either scraping or by using a hot decapping knife. I prefer the scraper…it’s simpler, and when it comes to bees, I like it simple.

We all took our turns doing all the jobs. Here, Christy takes the first turns of her ancient-but-perfectly-workable extractor.

Jim and Jennifer invited other friends over, too. And Jennifer made BLTs. I mean, how absolutely wonderful is a house filled with friends and with the smells of both warm honey and BLTs?—Heaven.

When Jonathan said he wanted to take his turn with the extractor, Jim beamed (that’s funny!)…he said he’d dreamed of this day. Thanks for sharing the dream, Jim.