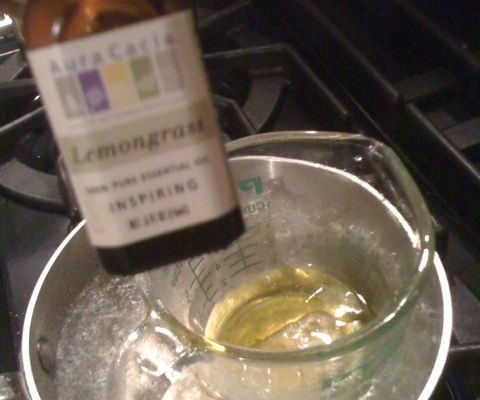 Those bee colonies that swarm are strong, and I want strong bees. I hated that one of my hives died last year…the hive that died was always kind of slow compared to the Amazons (which I got as a result of a swarm from Chris’s hive). It makes sense that it you’ve got strong colonies, you’d want to propogate them. And there are several ways to do that, though I haven’t done it yet.

Last night I mixed up a batch of swarm lure—I have to give credit to Linda over at Linda’s Bees. She posted this recipe several years ago.

I mixed 1/4 cup olive oil, a wad of beeswax (1/2 of a sheet of foundation), and about 20 drops of lemongrass oil. I heated the mixture together in a glass measuring cup that I placed in a pan of boiling water. Once it was all melted together, I poured it into a small foil bread mold we had in the cabinet. It solidified into a smearable paste in about 5 minutes. I wish I’d had a nice little jar with a lid, but all the jars I have are too deep to keep shoving my hands into.

Today I’ll head out to an unused brood box I’ve set up near my hives and smear it with this swarm lure. It’s supposed to attract bees…apparently the lemongrass oil smells like the queen pheremone; the oil and wax keep the lemongrass oil from dissipating and make the mixture workable.

In the swarm-lure box are 10 frames with beeswax foundation (I’m supposed to have some frames of drawn comb in there, too, but I don’t have any. All my combs are with the bees), so once the scout bees from a swarm come to check out the smell in my brood box, they should find a nice home in a good neighborhood all ready for them to move into.

Later today, I plan to call the police and fire departments in my area and add my name to their swarm capture list…then, if anyone calls to report a swarm of bees, I’m on the list of people who will go and capture it. It’s a great way to increase the number of robust bees.