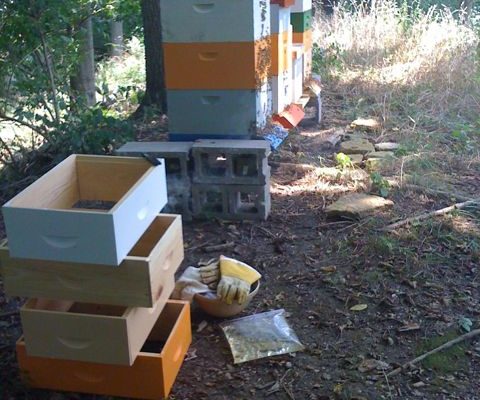 I began feeding the bees yesterday.

After months of worrying about it, I decided to post my concerns on beemaster.com and run it by the nice treatment-free beekeepers there. To a person, they responded that if the bees haven’t built up ample stores for winter, then I should feed.

Of course, there’s also an understanding that I won’t harvest honey from the bees only to turn around and feed them. I need to leave enough honey in the hive to allow their winter survival—which requires about 60 pounds of honey per hive.

And, you know, when you come right down to it, there isn’t really anything “natural” about keeping bees. So, if I’m gonna do all this beekeeping stuff like manipulating frames, making splits, harvesting honey, etc., then I have to come to terms with the responsibilities I accept as a result. If I were to keep livestock, I’d have to feed livestock. That’s all there is to it. When new bees arrive at my house in something as unnatural as screened packages, I have to feed them until they get on their feet.

Interestingly, when there’s a nectar flow (in spring and fall) and nectar is available to them, the bees won’t touch the sugar or sugar syrup. But when there’s a dearth, as there is here now, they suck it up like crazy.

I mixed 3 parts water to 5 parts sugar to make a syrup. I boiled the water, let it cool just a little bit, added sugar, stirred, let it cool.

I poured the syrup into Ziplock bags and zipped them up. Then I placed the baggies on top of the frames inside the hives…one baggie per hive…and, with a very sharp knife, I cut an X in the baggie. Amazingly, the syrup doesn’t completely run out.

I had to add an empty medium super to make room on top of each hive for the fattened baggie…but now I’ve got room to feed while keeping the hive closed to bees from neighboring colonies who may want to rob the syrup.

I’ll check today to see how much they eat. I can see already that I’m gonna have to run to Sam’s for huge bags of sugar…this may be another compromise…for years, I’ve sort of boycotted Sam’s and Walmart. And now I’m gonna have to boycott Target for their idiotic decision to back anti-immigration legislation in Arizona. But this has nothing to do with bees, so I’ll save it for another blog.

Here are pictures from the first feeding: