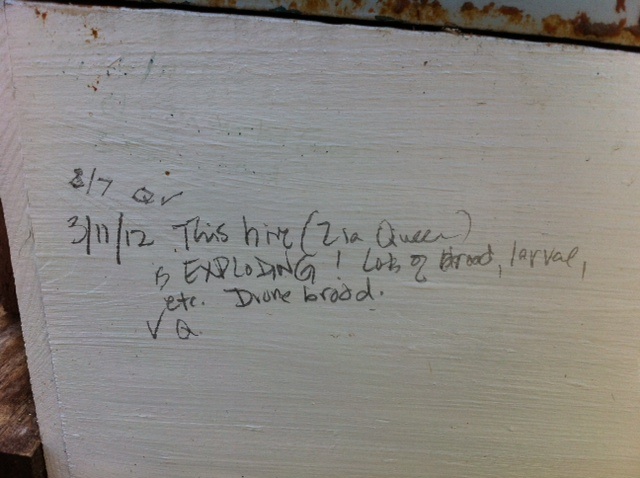 I went out to the beehives at 3:15 PM yesterday in order to film for you the young Amazon bees orienting. They were so active that I wanted you to see them, too, Reader. I got a brief video of them, but then a bee went in my  ear and freaked me out. I slapped and slapped to get it out.

Then I heard more bees. In my hair. By this time I was running through the yard slapping. And getting stung. (Yes, Reader, I am well aware that this slapping and freaking out doesn’t help the situation. I’m not stupid.) I picked up an old sweatshirt laying in the yard and began slapping my head with that. I got stung about 6 times—in my head and ear and neck.

Once the stinging stopped, I realized that all this slapping had flung my glasses off my face. Probably deep into the woods. Deb and I have searched and searched and we can’t find them. We even went out there at night to see if the beam from a flashlight would reflect off them. No.

I am now wearing very very old glasses. I look odd, and I can’t read.

But here’s your damn video. (Once again, I forgot to turn the camera sideways for the wider view. I don’t know why I can’t remember to do that. Sorry.)

The minute I put that wax melter out in the sun, the sun disappeared. Then the temperatures dropped. And no wax on earth will melt at 70 degrees and under cloudy skies. So, we’ll try when the weather heats up again.

But doesn’t it feel great out there? Every single one of our windows is open, and I’m sitting here in a flannel shirt.

Which brings me to the solstice. Once the days begin to get shorter, the queen’s egg laying begins to slow, too. Which means that—even though it’ll still feel like summer around here for a few months—the hive begins to prepare for fall and winter. Conservation begins. Then, in January, when the winter solstice arrives and the days begin to be imperceptibly longer, and even though it feels as if the cold will never end and the earth will never thaw, the queen begins to gear up for egg laying again. She beings laying in earnest in February. The cycle of the hive is perfectly synced with the cycle of the sun.

No matter where you live or what your temperatures are like, your hive cycle depends not on temperature but on the length of the day.

And here’s what it feels like when your hive swarms in April, May, or June.

At first, I had this image filed under “Telling the Bees” because the beekeeper looks so distraught. Maybe that’s one reason I really love this piece…it fits many emotions.