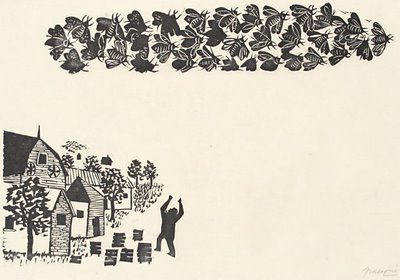 The minute I put that wax melter out in the sun, the sun disappeared. Then the temperatures dropped. And no wax on earth will melt at 70 degrees and under cloudy skies. So, we’ll try when the weather heats up again.

But doesn’t it feel great out there? Every single one of our windows is open, and I’m sitting here in a flannel shirt.

Which brings me to the solstice. Once the days begin to get shorter, the queen’s egg laying begins to slow, too. Which means that—even though it’ll still feel like summer around here for a few months—the hive begins to prepare for fall and winter. Conservation begins. Then, in January, when the winter solstice arrives and the days begin to be imperceptibly longer, and even though it feels as if the cold will never end and the earth will never thaw, the queen begins to gear up for egg laying again. She beings laying in earnest in February. The cycle of the hive is perfectly synced with the cycle of the sun.

No matter where you live or what your temperatures are like, your hive cycle depends not on temperature but on the length of the day.

And here’s what it feels like when your hive swarms in April, May, or June.

At first, I had this image filed under “Telling the Bees” because the beekeeper looks so distraught. Maybe that’s one reason I really love this piece…it fits many emotions.