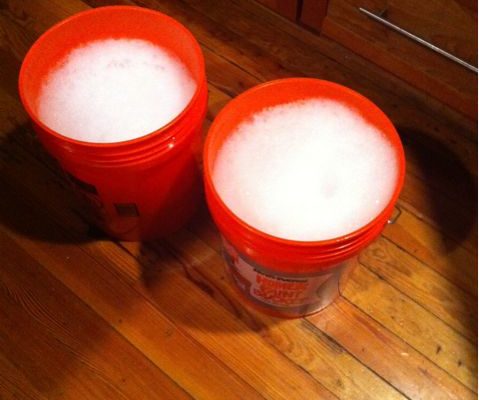 I kept seeing all these little yellow jackets as I was feeding the August Boatwright hive yesterday. I squished a lot of them with my hive tool, but they just kept coming, so I investigated. Hundreds of them were coming up from beneath the cinder block on which I’d placed my new bee-tree hive. Shit. Looks like there’s a nest beneath the beehive, and they went straight for the sugar water I fed the bees.

I swear, I’m not sure how to handle this one. The August Boatwright hive isn’t yet back on its own two feet after their removal from the bee tree. They’re still recovering, and their hopes for survival are slim even without this f*cking yellow-jacket invasion…they haven’t yet built up enough bees or the defenses to fight off yellow jackets or other threats.

I immediately reduced the size of the hive entrance—I would move the hive to another spot altogether if I thought they could take another relocation, but I hate to mess with them just as they’re getting their legs back under them.

Treatment for yellow jacket nests? Douse them with gasoline and let the fumes kill them.

Problem with that? Their nest is just beneath the bee colony, so the fumes would kill the bees, too.

JP, my new friend on Beemaster.com, suggested I soak them with hot soapy water—the soap suffocates them. I have to do this at night when all the yellow jackets are in their nest. So, last night I mixed up two five-gallon buckets of hot, soapy water, put on my full-fledged bee suit, stumbled out to the beeyard in the dark, and dumped all the water and soap where I think the nest is.

The sun isn’t yet up this morning, so I can’t assess how this worked. I’ll let you know, though.