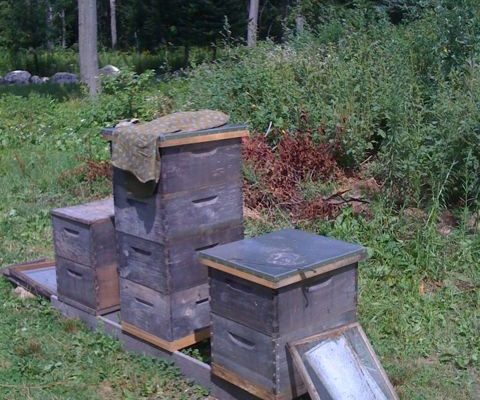 Now that I’ve had a day for my brain to clear, I can offer a brief report of my responses to the 2010 Northeast Treatment-Free Beekeeping Conference: It was tiring. I mean…it was three and a half 13-hour days of programming. And that’s an awful lot of exhausting.

But it was also approximately 45 hours of bee school, and that makes for a much smarter beekeeper…as soon as all that information sort of settles in, that is. Right now, it’s free floating.

Okay. Maybe I’m still too tired to give you a good reflection. I’ll do it one day soon, though, yes? Because my emerging beekeeping philosophy continues to develop, and I know you’re on pins and needles wanting to hear about it. :)

Let me simply remind you of this for today: If you buy your honey from the grocery store, it probably comes to you from China, and the bees that made it were treated with some very serious chemicals inserted directly into their hive.

If you buy your honey from a local source such as a farmer’s market or from that nice old guy at the end of the lane, the bees that made it were almost certainly treated with the very same, very serious chemicals that were inserted directly into the Chinese hives. And even though the bottle says your honey is pure honey, it’s not. It’s full of chemicals that 99% of the beekeepers believe is necessary to use in order to keep their bees alive. And I’m serious about this shit. It’s appalling.

I tell you this because I am experiencing it first hand. I have been sold (and I am still in possession of) the assortment of chemicals of which I speak. They are in my garage near the trash can. They’ve been there for over a year. Every single solitary beekeeper I know—other than those with whom I gathered this week—use those chemicals without even thinking about it. When to treat the bees is taught in beginner’s bee schools. And then everyone wonders why the bees are dying.

It’s not the beekeepers’ fault. Most of them know no other way and have not considered alternatives. But there is another way. And it’s up to a small number of curious beekeepers who naturally gravitate to research and who are hell-bent on returning to natural beekeeping (which, I admit, it a problematic term as there is nothing “natural” about beekeeping) to change the thinking of an entire beekeeping culture.

Have I whet your appetite for more? I hope so.

Here’s what you can do to help, Reader:

Here’s one thing I’m thinking. I’m considering the paint-free approach to hive boxes. It saves time and money, and I think it looks kind of cool, too. What do you think, Reader? Then again, if I don’t work with beekeepers who subscribe to other philosophies, how can I hope to spread what I’m learning about natural beekeeping?  I don’t want to come off as an elitist know-it-all. And I’m sure I can learn a lot from experienced beekeepers of all philosophies.

But this fellow I mentioned in an earlier post greeted me by immediately telling me all about the chemicals with which to treat the hives at what time of the year. That’s not at all the way I want to go.  It doesn’t sound like fun. I want keeping bees to be a fun and innovative and creative and aesthetically pleasing lifestyle. 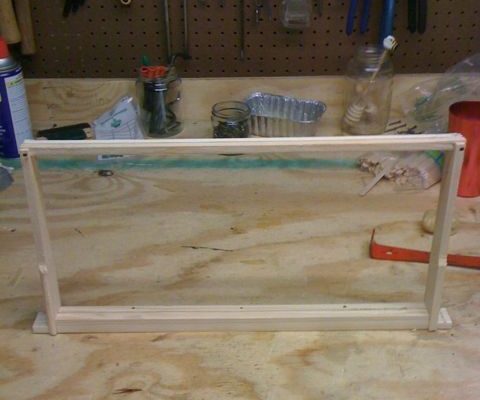 I tried to follow some internet directions on how to start foundationless frames, but they seemed sort of messy and complicated. And yesterday I discovered a pretty good and very quick system and completely clean process that I’ll share here.

Here’s an empty deep frame with a split top…there’s a little groove in the top (the frame in the photograph is actually resting on it’s top) into which the wax foundation usually slips, and that’s where we’re going to install a guide of wax that will give the bees some direction. It tells them where to begin and which way to build their comb. I have some unused beeswax foundation (the kind with the wire running through it). I bought the foundation before I decided that going foundationless made more sense for me and my bees. It works perfectly for this process. I simply break or tear the foundation along the wire…it breaks naturally there. Then, I lay the strip along the groove in the top of the frame. I cover the length of the frame with the strips of foundation. Then I place my hand on the wax to soften it a bit. Once the wax is pliable (and this works much better if it’s done in a warm room), I press a series of popsicle sticks through the wax and into the groove. The popsicle sticks provide a frame around which the wax will wrap. I wrap the wax up and around the popsicle sticks. The warmth from my hands softens the wax perfectly and makes it pliable. I mold it and shape it as I go. That’s all there is to it! I now have a nice little start of wax from which the bees will hang their own comb. This process involves zero mess and requires no additional tools (other than the hive tool I use to chop off a little bit of that last popsicle stick so it’ll fit).

This takes me about 3 minutes per frame…no wax melting, no wax painting, no syringes or application tools. Just a little bit of pre-formed foundation, some popsicle sticks, and the warmth from your own hands will do it. And I guess I’ll use these tiny leftover popsicle sticks in my smoker. Yep. This is as much about recycling and simplifying as it is about anything, right? Amazons—No signs of the queen yet. I’m choosing to remain patient, though, because I think it’s a little too early to see signs of her post swarm. Amazons swarmed 16 days ago, and it should take about 22-25 days for the new queen to be born, orient, mate, and begin laying.

But I was surprised at how few stores the Amazons had in their hive. They need a queen, and soon.

Tomboys—Loads of new bees hang out and orient to this hive, but the inspection shows no sign of a queen…no eggs, no larva, etc. And there were supercedure queen cells on several of the frames. This really surprised me, but it’s becoming a common story in regards to packaged bees and their queens (another reason to begin using locally raised, hardy, disease-resistant queens. Or learn to harvest the queens raised by my own bees). These supercedure cells (they look a lot like peanut shells) are a sign that the colony either doesn’t have a living queen or they don’t have faith in the quality of the queen they have. They’re making plans for a new one. You gotta hand it to them. They don’t tolerate disfunction.

Girls of Summer—These girls haven’t required much attention at all. They’re the quietest of the three colonies, and though there are some new bees orienting, I thought I’d be disappointed in them. Not so. They are healthy, and the queen is laying in a great brood pattern.

I replaced three old frames in Girls of Summer because the bees are avoiding them…the frames I removed are three I inherited from Chris last year. I replaced them with three frames of fresh foundation, but I wasn’t thinking well when I did that. I need to go back in and replace those three new frames with foundationless frames…frames in which I’ll use popsicle sticks to guide the new comb building.

“Iddee” on Beemaster forum suggests I take one frame of brood and larvae from Girls of Summer (because their queen is a good-laying queen) and put it in Tomboys. After 7 days, he says, I should check for queen cells on that frame; if I find more than one, I’m to cut one out and put it into Amazons. He gave me directions for doing this procedure.

This, Reader, is the direction I’ve been waiting for. It’s time to start managing my bees. It may be the only way I can develop strong hives organically.

I’ll totally keep you posted. With pictures (sorry about no pictures. Yes, I take my camera out there, but it’s cumbersome. And I get so involved in things that I forget).