My friend Heather posted this video on her Facebook page yesterday.

I have two favorite parts:

My least favorite part: the fact that posting the video is so laborious. It’s a pain because it’s not from YouTube. So, I’m just gonna link to it here. Sorry. 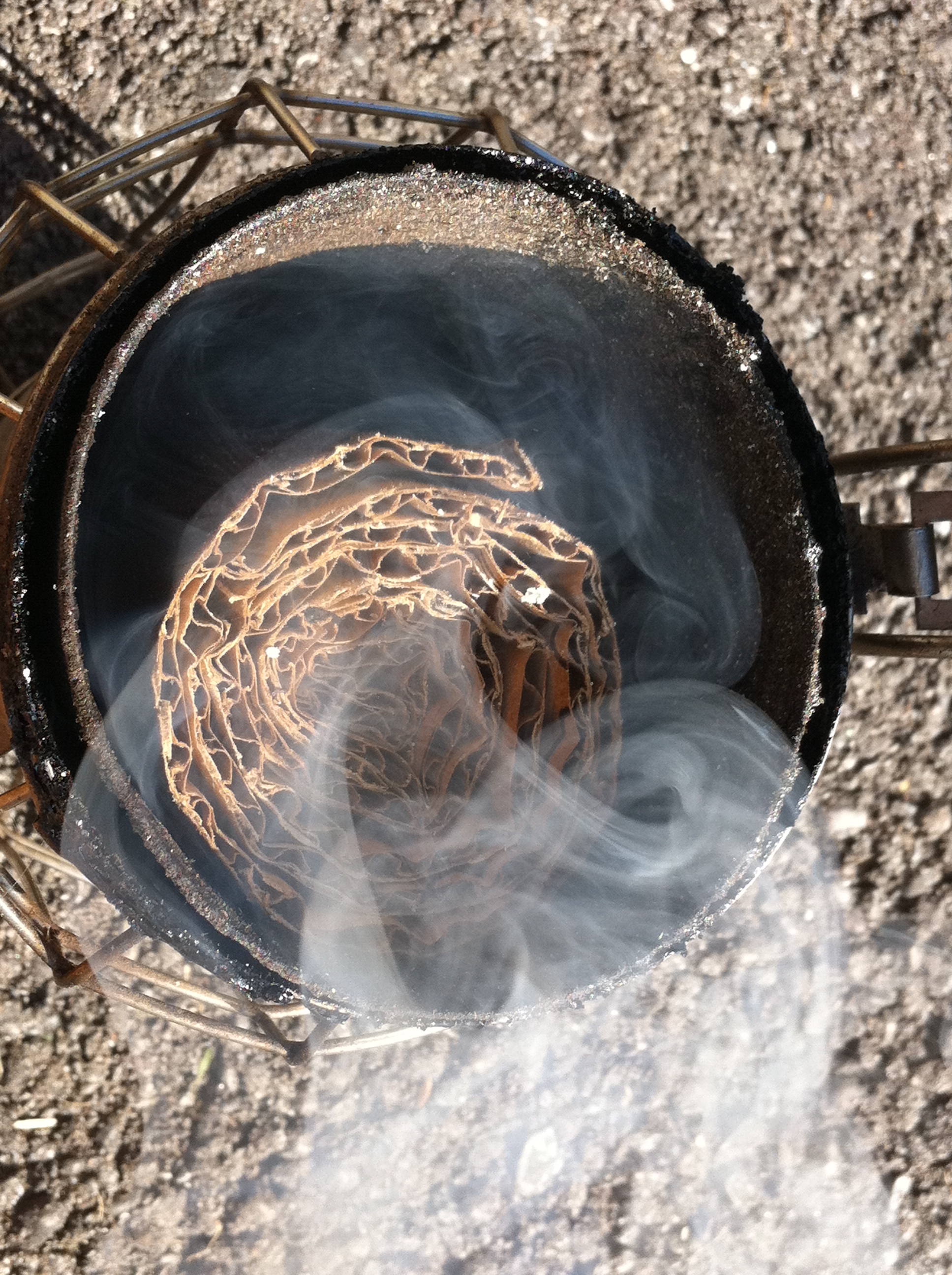 I know, I know. I’d planned to visit with you about the “colony vs. hive” nomenclature challenge when it comes to writing about the bees.

But I’d rather tell you about smoke bombs instead.

Keeping bees is challenging…which is probably why I’m so hooked. One constant challenge is keeping the dang smoker lit. Funny, this summer at the Zia Queenbee workshop, ten rather-experienced beekeepers all hauled our smokers and our veils to New Mexico to learn how to rear queen bees. It shocked me that each of us wrestled with our smokers. Of the ten smokers present, only one or two kept a good smoke going the one or two hours of our work in the hives.

Simon, my friend and one of my bee stewards, has convinced me that cardboard makes great smoker fuel. Then, I saw a video of a guy who uses rolled-up corrogated cardboard in his smoker…loading one of these bombs into the smoker feels good. It also provides for a slow, cool burn.

So, I began to roll what I call “smoke bombs” from cardboard boxes. I roll the cardboard tightly, making sure the corrugation runs up and down in the smoker so air can flow from the bottom to the top and out the smoker spout. I tie them off with string, or I wrap them with masking tape so they hold their shape, and I keep a collection of them in a bag with my bee stuff (some of them find their way under the seat of my car or other surprising places). So far, I can report that they burn better than anything else I’ve found. They’re lightweight, they keep forever, they’re completely portable, and it’s a good way to recycle.

UPDATE: If you wait until your bomb is smoking a bit, then pack some burlap around it, you’ll get a TERRIFIC smoke that lasts a very long time. Bingo.

P.S. I now use a propane torch I bought at Home Depot to light my bomb. These days, my smoke starts fast, lasts a long time, and doesn’t poop out.

You should smell my car. Well, first you should know that I drive a 12-year old Nissan Pathfinder (it has over 160K miles on it, but I’m not giving it up…I figure I can get 250K miles out of it. I don’t quit on things).

My car smells like smoke and beeswax, and it’s a joy to sit in when I’ve been visiting beeyards. Why? Because the smoker’s still smoldering in the car, and I often have some freshly used frames of beeswax in there with me.

So, let’s talk about the smoker—which is the single most important tool when it comes to keeping bees. Even those beekeepers who don’t routinely wear veils use smoke. I’ve never met a beekeeper who doesn’t have a smoker lit and ready to use when visiting the bees, and I probably wouldn’t work with one who didn’t.

And wouldn’t you know it? The single most important beekeeping tool is also one of the most pleasant and sensory to use…but it’s also (initially) a pain in the neck. It takes some time and some attention (and some experience) to get a smoker properly puffing away…and I admit, it’s tough to carve out the necessary time and attention when you’re in a rush to open a hive. Frankly, I’ve come to think of lighting the smoker and nurturing the smoke from it as a sensory way to transition from the rush rush rush of daily life to the calmer behaviors appreciated by the bees.

You want to know why beekeepers use smokers, don’t you, Reader? Well, the short of it is this: Beekeepers announce their arrival at the hive by puffing a bit of smoke into the hive entrance and under the lid. This announcement leads the bees to think there may be fire in the area, so they begin the process of engorging with honey in the event they must leave to find a new place to live. And when bees eat honey, they become calm. A bee filled with honey does not want to sting. However, in the event a bee didn’t get the message and does sting, the smoke serves to mask the alarm pheromone (emitted at the time of the sting) that signals other bees of danger; so, it reduces the chances of more stings.

We keep the smoker lit and puffing away in the event the bees become agitated. A little cloud of cool smoke settles everyone down…including the beekeeper who, when she operates those billows, feels as if she may have some sort of control over the world. Which she does not have at all. But it smells nice and looks cool.

All of this to say that I’m now using a new smoker—a Rauchboy. From Germany. It looks awesome and smolders like crazy. It’s a little more expensive than the run-of-the-mill smokers, but I want mine to stand out in a crowd. I’ve kept it lit in the backyard just for the heck of it…just so it can hurry up and get its patina on.

We’ve had company for a few days, and that got us a little bit off our usual schedule around here. But I put our guests on a plane this afternoon, and when Deb got home we went out to check on the bees. Things seemed calm and happy, and I’m convinced that activity at Tomboys and Girls of Summer was simply new bees taking their orientation flights. They were all sunning lazily on their front porch when we arrived late in the day.

We decided that Tomboys and Girls of Summer may need a honey super on top of their two brood boxes…our spring has been so wonderfully full of flowers and generally good weather, and I think our new colonies may want to make some honey for us. They’re certainly full of bees who want some work to do.

So, before we headed off to dinner on our scooters, we decided to put a new super on Tomboys…without using the smoker, without a veil, without gloves, without a hive tool, without a brain. The second we lifted the inner cover from the hive, bees came after us like a house on fire. I got stung immediately on the neck, so I threw the lid on the hive and ran like hell through our back yard with bees after me. Deb wasn’t far behind…slapping her ear and her leg and her head. I got a bee in my t-shirt, so I ripped it off and ran around the yard in my bra. In broad gorgeous daylight. I put my shirt back on and another bee got in there. I ripped it off again and beat the air with it to get the Tomboys to back off. God, I hope the neighbors weren’t watching.

We both got stung…I got one, maybe two. Deb got two stings.

What was I thinking, Reader? Geez. What an idiot. We got a good laugh out of it (as well as a couple of angry red welts), but I’ve learned not to go about these bee things so cavalierly.