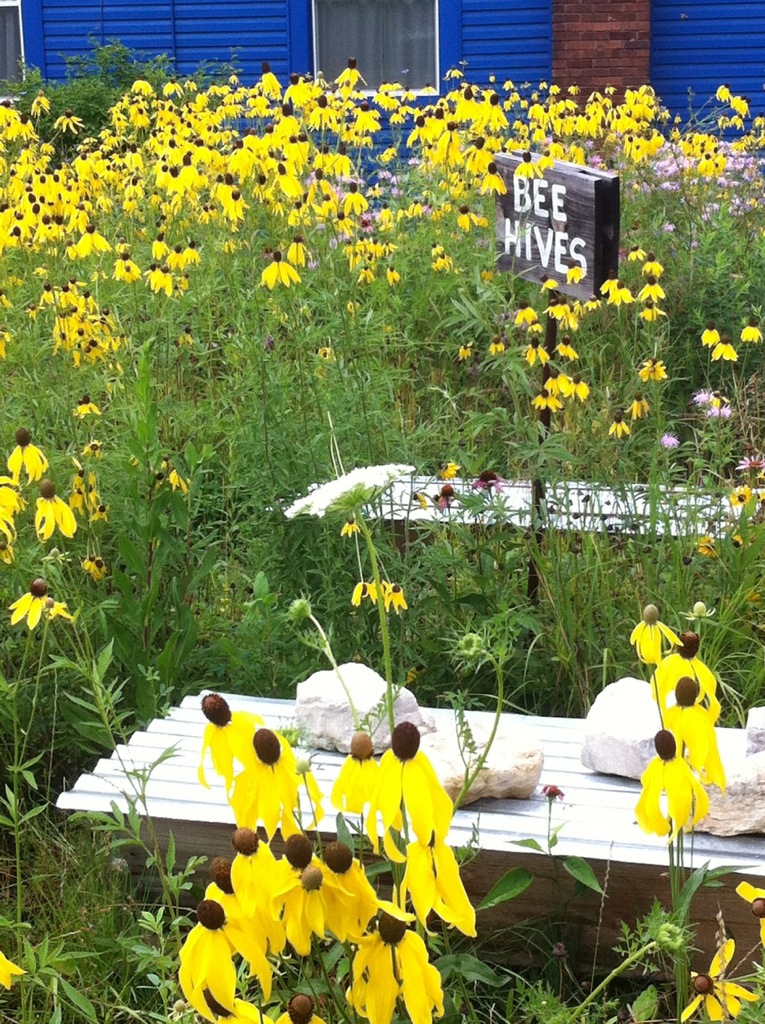 Reader, some of my bees are starving while other hives are packed with honey.

The starving bees are located in suburbs and on big farms. Two locations which oddly enough actually have one big thing in common…they’re both boring. Boring to death. Sorry to say this.

If you and your neighbors love nice green grass, and if your grass is treated with herbicides and if the lawn-service truck routinely sprays and if you think clover and dandelions reflect that you’re a bad homeowner and if you keep all of your flower beds perfectly groomed and free of weeds, then the bees in your trees are probably starving. Because this is a sickly idea of beautiful. It’s not our fault. We bought into this idea that thin is beautiful. Not only when it comes to our bodies but also when it comes to our lawns and our lives.

I am getting off that stupid train. Hear me.

And those farms that grow one crop…say, soybeans or corn…and it hurts me to say this because I love corn so much…but that single crop is a bee killer. It’s not the crop that’s bad, it’s the singleness of it. Monoculture farming is unbelievably boring.

Frankly, Reader, I think I’m about to go off the deep end into this wildness.

The bees doing best live near and forage in

Reader, I am the steward of a one-acre yard. In a nice suburb. And it is almost all mown. And the bees that share this yard with me are begging me to change it. And I’ve learned to listen to both the bees and my gut…so I intend to allow some wildness into my yard and thus into my life. The bees in my care here are whispering to me that I’ve grown dull. And that it’s high time I strike out into something unpredictable. 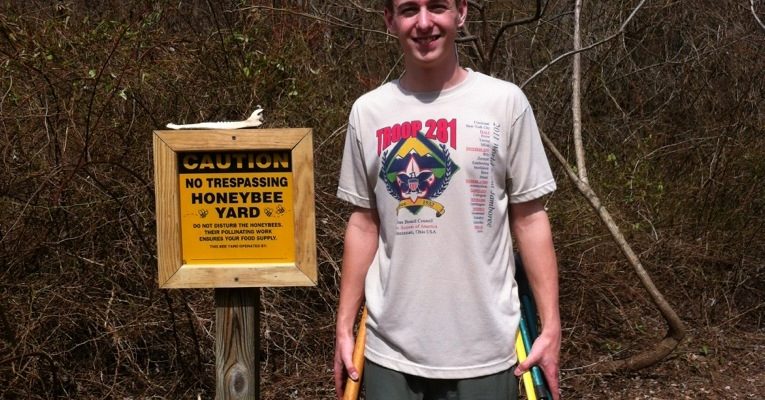 The new bees arrive next Saturday, Reader. And, boy oh boy, am I ready.

I spent some time at the farm this weekend—where the dandelions are a little bit ahead of the dandelions at home…and bees were visiting most of the low, yellow flowers there.

So, Reader, if you’re still into plucking each pretty dandelion from your yard, let’s revisit that idea, okay? I feel sooo much better not fighting it…I love my yard so much more now that what I think of as “beautiful” has shifted.

The lawn company visited my neighbors’ rather dull yards this past week in a misguided effort to eradicate everything but green grass—no dandelions, no clover, no pretty blue or white or purple weeds. Sad, sad, sad. Their sickly yards are so boring when compared to mine.

To me, a yard is beautiful only if it welcomes sweet honeybees and butterflies and frogs and snakes and bats. And all the other wildlife that makes our lives so textured.

One place that has remained wonderfully and mindfully wild is California Woods Nature Preserve, future home to four or five honeybee hives.

And this is Justin Dunham whose Eagle Scout project reintroduces honeybees to the California Woods bee yard (Justin has grown about a foot taller since I first met him).

Last week, Justin oversaw the clearing of the path to the bee yard so it will accommodate my bee truck. He and his troop and their leaders also cleared the overgrown space around the hive site. And yesterday they placed the hive bodies. Next week, BEES return to California Woods Nature Preserve. So when you’re hiking through the woods there, Reader, hike over to the bee yard in the meadow and applaud Justin’s work. 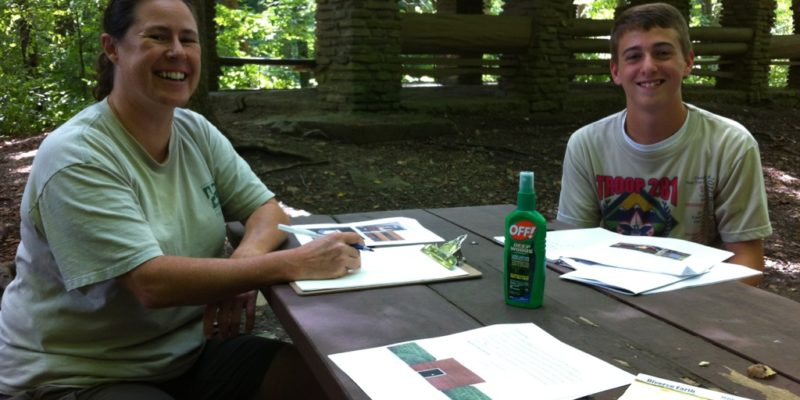 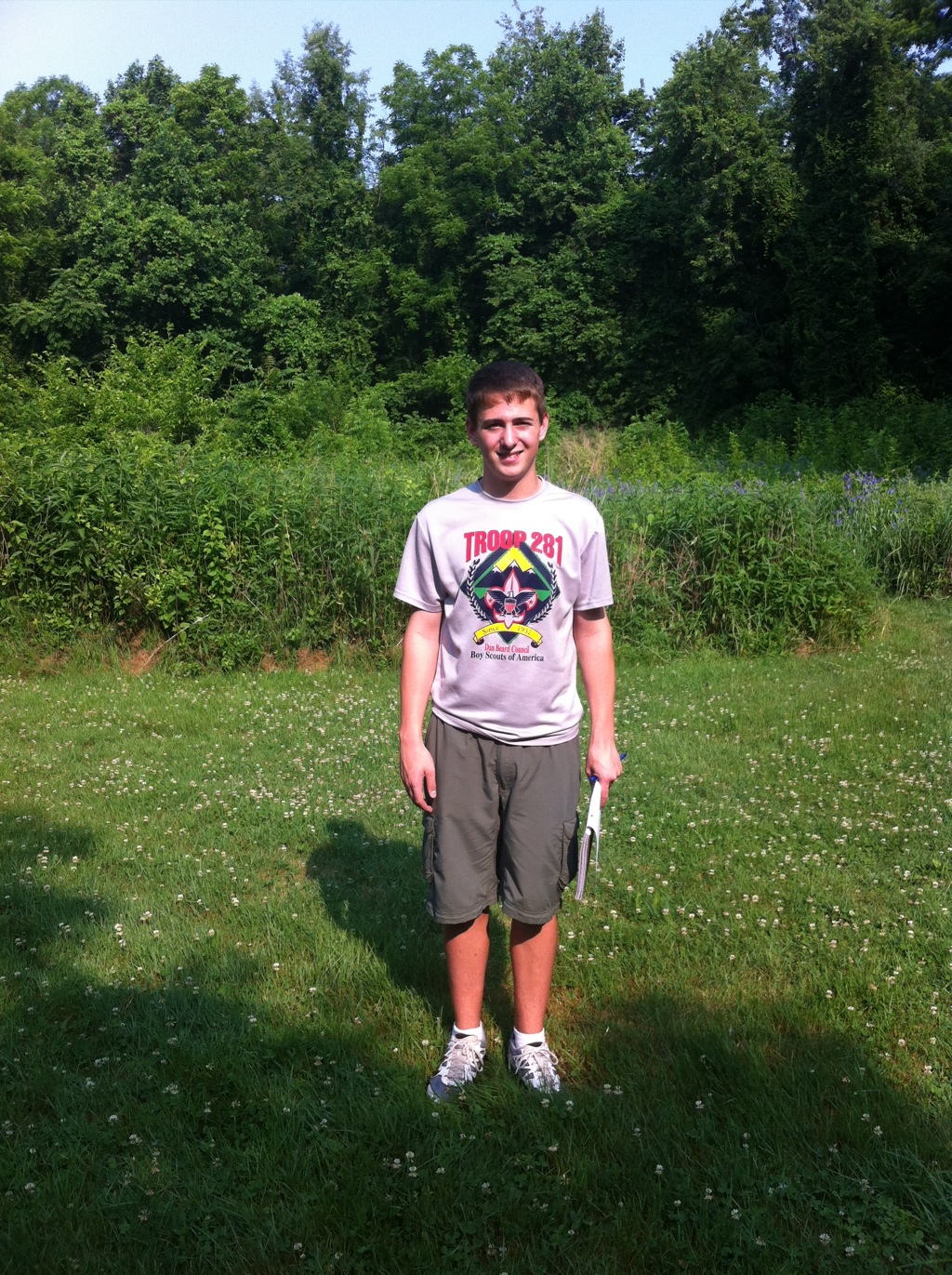 Reader, it’s time for you to meet Justin Dunham. Justin is a young man determined to reintroduce honeybees to California Woods Nature Preserve. But to get started, he’s had to sort of corral me…in a season that’s made me almost uncorralable (yes, I may be inventing words here, but it works). And Justin has very politely and diplomatically and doggedly pursued me, pinned me down, won me over.

Justin is a boy scout who is plotting to reintroduce honeybees to the nature preserve as a part of his Eagle-Scout project. I mean seriously, I love Eagle Scouts. I know a few, and I like each of them a whole lot.

Apparently, California Woods Nature Preserve once had a small beeyard, but because of budget cuts, the staff could no longer afford to manage the bees there, and the beeyard fell away with the money. When Justin visited with the nature-preserve staff and explained his idea to them, they explained back that although he was welcome to put bees in the old beeyard, there would be no one available to manage them…the staff probably thought this would be a real obstacle for Justin, but, as I told you earlier, he’s a determined young man. I think Justin spells “obstacle” C-H-A-L-L-E-N-G-E.

Justin discovered this TwoHoneys website, where he learned that I manage honeybees placed in various properties around Cincinnati and Kentucky. A little light bulb lit in him. Justin figured this was part of his solution…he would orchestrate the various players—the bees, the staff at the nature preserve, and me. So he contacted me. I hate to say that I didn’t respond to his first email. I wanted to, but things were flying apart around me at the time, and I put it off. Justin was not deterred. He contacted me again. He got my phone number and he called me. He called me again. Justin has a steady and even voice. He knows what he wants to say when he says it. You can hear him thinking before he speaks. And I like that a lot in a young man. He very respectfully and yet persistently contacted me until I responded to him. Then, he then kept me on track with our conversations and with setting dates for our meeting at the nature preserve.

We met for the first time amid a fury of mosquitos yesterday. Justin wore one of his scout uniforms, and I like that. A lot. Justin’s dad, Jeff, drove him to the nature preserve and walked the trail to the beeyard with us, where we all discussed the promises and the challenges of Justin’s project. Justin carried a notebook with him. He took notes.

Reader, this is your introduction-to-Justin post. I have a feeling you’ll be getting to know Justin pretty well over the next years. He has four years to complete this project…which, I’ll have you know, involves more than simply putting a few beehives in an open field and turning them over to my care. But I’ll let you wonder more about it…I’m not gonna spill all the beans right here.